Phantasmacore Picks Up “In the Bunker, the Last Day”

Just learned today that Phantasmacore is going to publish a somewhat satirical, post-apocalyptic flash piece of mine called “In the Bunker, the Last Day.”

It’s a weird little story with a very unusual, somewhat experimental structure. As the mother of this precocious little one,  I’ve always had a soft spot for it.  Particularly when I haven’t read it in a while, the last line makes me laugh.  I probably shouldn’t admit that my own work makes me laugh or cry, but there you have it.  I’m delighted it has found a home.

I don’t yet know exactly when it will appear, but don’t worry.   I’ll post here when I know.

I had something of a lull in my novel-reading extravaganza while in Scotland.  One would think that being on vacation would mean more reading rather than less, but I suppose it can only be a good thing that we were so busy having new experiences during the day that I had no reading time, and I was too exhausted to do anything but fall into bed when we got back to the hotel at night.  I did read a bit on the plane.  Also did some reading last weekend on the plane to and from Boston (we went to a family wedding).

I also finally read Mark Helprin’s collection of short stories, Ellis Island, and Karin Tidbeck’s collection, Jagganath, both of which I loved and are high up on the “I want to write stories like this” list.  Tidbeck’s stories are, for the most part, of the same variety I associate with many “interstitial” writers I admire.  Except for a couple of stories, like the title story, her worlds are pretty much realistic except for one or two things that aren’t.  It’s those things that give a wonderfully uncanny mood, which is something I’d love to be able to capture in my own work.   As for Helprin, I’ve loved his work since I read Winter’s Tale back in the day.  As I read his collection, I kept wondering how it was I’d never gotten around to it before.  Some of the stories in Ellis Island are more realistic than others, but I admire most his magical pieces, which are simply transporting.  His voice sometimes feels out of time, like from the 19th century, but without archaic language.  I really love that effect and would love to try to channel his voice in something of my own.

Now that I’ve sold another flash piece, I really need to polish up the two I have in the works and start them circulating.

Now It Can Be Told! (And a Short Update)

I haven’t been identifying my honorable mentions and semi-finalists in the Writers of the Future Contest by name in case a potential publisher is evaluating one of my submissions and visits my site. I don’t know whether a given publisher will consider a contest shortlisting a good thing or a bad thing.  In the “literary fiction” arena, from whence I hail, shortlistings are generally a good thing.  But I’m still learning the mores of genre submitting, and to make things more complicated, there seems to be conflicting information on just about everything having to do with submitting to genre publications.  As a lawyer, I’ve learned the value of keeping one’s mouth shut when in doubt and it seems silly to take the risk of prejudicing a decision, so I’ve kept mum on the subject.

Now that one of my honorable mentions has appeared in print (Andromeda Spaceways Inflight Magazine Issue 59), I feel I can make the following revelation.  Drum roll, if you please: 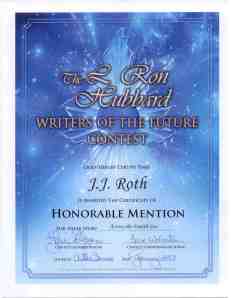 I’m eagerly awaiting my contributor copy of ASIM 59, which I’m told will be winging its way to me shortly.

In other news, I just got back from two weeks in Scotland.  I’ve been before, but never for this long, and never as a tourist. I’d forgotten how much I love the UK in general and Scotland in particular.  Everyone I ran into was extremely friendly and there’s a joie de vivre about the place that is contagious.  Loads of fun, and now I just wish I could win the lottery (or at least make a living as a writer rather than a lawyer with that pesky bar admission issue) so that I can buy a little cottage in the highlands and live in a place full of history, magic and wonder. Here’s a taste:

Stirling Castle, one of several castles we visited.  I have many, many pictures of this one, as it’s a large complex of buildings, almost all of which are accessible to visitors.  The day we were there, the tapestry weaving demonstration was closed, but other than that we saw all there was to see, including the kitchens, the prison cells, the great hall, and the royal bedrooms. 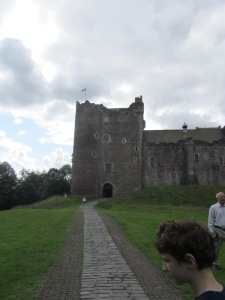 Doune Castle, famous as a movie location, among other things.  You may recognize it from any number of films and television programs, including Monty Python and the Holy Grail, Game of Thrones, and the new Outlander series.  We only saw this one from the outside because we were running off to Loch Lomond. 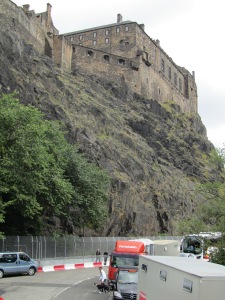 Edinburgh Castle. A striking building from the outside, perched as it is atop volcanic rock at the end of the Royal Mile, seen here from the top of a double decker city tour bus.  Interesting, especially for us history buffs, but small, on the inside. There’s much more to see at Stirling in terms of square footage, but as this is one of Edinburgh’s main attractions, it’s worth a visit. 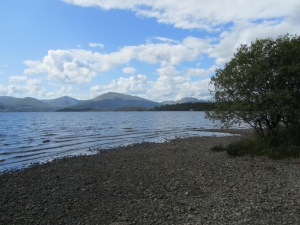 The bonnie, bonnie banks of Loch Lomond.  A gorgeous, peaceful lake in an idyllic wooded setting.

The dark waters of Loch Ness.  Nessie did not make an appearance during our boat ride on the loch, but I had a beer called Nessie’s Monster Mash from the bar on board.  Enough of those and you’ll see her doing the Macarena in a polka dot chiffon dress.

I could go on, but I’ll quit while I’m ahead and close with a few for the Harry Potter fans: 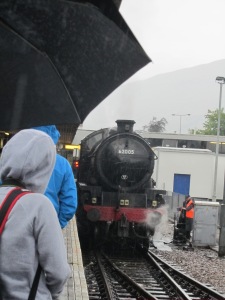 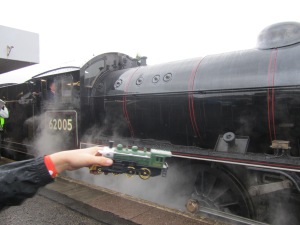 The Jacobite Steam Train, aka Hogwarts Express, which you can ride on a route that travels over the viaduct pictured above.  Poor train.  It was photobombed by my no. 2 son’s replica of itself.

Ah Scotland, I miss you and I’ve only just left.  Cheers.

Andromeda Spaceways Inflight Magazine accepted my story, “Across the Fourth Sea,” for issue 60, but it now appears that what was to be issue 60 has been pushed forward to issue 59.  I’m looking forward to seeing edits to the story and ultimately to seeing it in its lovely new home.

My first accepted speculative fiction story, “The Righteous in this Generation,” was originally scheduled for publication in the June 2013 issue of Aoife’s Kiss.  Because of various issues arising out of the sale of some of the Sam’s Dot publications to White Cat Publications, this date has changed.  Though it seems clear the story will appear in Aoife’s Kiss within the next year, the exact date is not yet determined.

In other news, I went to my first SFF convention!  A friend and I went to Baycon for a day in Santa Clara last month.  We sat in on an interview with Lois McMaster Bujold and attended an urban fantasy reading.  Now that I’ve got my feet wet, I can see how these gatherings could be much fun.  Wiscon and Worldcon in 2014 or bust!

My day job has become busier than usual, and I have gone through something of a fallow writing period.  I haven’t  completed a new story since January.  Meanwhile, I’ve seen a lot of my inventory depleted, which is a good thing.  But most of the stories I have circulating now are either flash or novella.  I’ve been more successful at short story length than flash length, and my flash tends to be unconventional.   I do love two of the flash stories I have circulating so I continue to hope for the best and let the chips fall as they may.

I have been attending my Writer’s Studio class and turning in my exercises, but I haven’t been inspired to continue any of them into a story. Until very recently.  I’ve been working on a structurally experimental story, i.e., it breaks a lot of rules about tense, conventional narrative, dialogue — okay, pretty much everything that has a rule.  I could wish that this wasn’t the exercise that spoke to me, but that would be unfruitful.  Whatever it turns out to be, marketable or not, it will be fun to write.

I’m looking forward to the summer.  Another class with Cat Rambo on online presence for writers (which I clearly need), a UCLA extension class on SFF, and my Writer’s Studio class, and, I hope, a vacation.  Scotland is high on my list, and my no. 1 son’s, but we shall see.