I write fantasy and science fiction.

Kaleidotrope Accepts “Tell Me a Story”

I’ve been trying to crack Kaleidotrope since I started submitting speculative stories. Many writers I admire have had stories in this zine, and I like what the editor, Fred Coppersmith, is doing with the zine. I remember reading an interview with him about five years ago (though the interview took place in 2009) in which he mentioned Lady Churchill’s Rosebud Wristlet and Electric Velocipede as the standard bearers for the work he is interested in doing. That’s what I’m interested in doing as well, so I’m delighted with this outcome.

This story received much love from the professional zines and from contests, and I consider it some of my best work — all the more reason I’m excited it has found a home and (I hope) a readership.

Diabolical Plots Recommends “All of the Cuddles With None of the Pain” for Your Hugo Ballot!

I’m so incredibly honored that David Steffen of Diabolical Plots liked my story, “All of the Cuddles with None of the Pain,” well enough to put it on his suggested reading list for the Hugos!

I’ve been on a bit of a hiatus for reasons I won’t go into — I haven’t even sent out a story in a while, much less written one — but this made me feel so happy I might have to send some stuff out this weekend. 🙂

Also, the same story appears as a suggestion for the category in File 770’s open list for Hugo readers/nominators. Thanks, JohanP!

It’s my great pleasure to announce that my story, “Lucky Shanghai Dumpling,” is out in this year’s issue of Phantom Drift. You can also find the journal available for sale at Amazon.com. Support the arts and buy a copy of a real print journal you can hold in your hands. The production values are quite lovely.

I’ve long admired this journal and I’ve been trying to crack it for several years now. Thanks to the fiction team — Matt Schumacher, Martha Bayless, and Peter Grandbois for selecting my story and giving it such a beautiful and esteemed home.

I came oh so close to being able to say I’m an award winning writer — but didn’t quite take it over the finish line. I had a story in the final “6” (really 7 this year) for the 2016 Aeon Award, a contest run by the Irish zine Albedo One. Though my story didn’t take one of the three winning slots, it was a nice showing among the 52 shortlisted stories for the four rounds held during the year.

The story that made it that far is some of my best work and has received a lot of love from professional and semi-pro zines even though it hasn’t found the right match yet. I remain hopeful someone will snap it up.

Just a quick note to say that the volume of Wild Musette with my story, “Piper: A Song for Flute and Chorus,” is available now for purchase on the zine’s site or at Amazon.com. The volume’s name is The Sin Eater. I’m also told to expect the story to be available to read online on or about December 4, 2017. I believe you need to register at the site to get access to the stories, which are made available on a staggered schedule if you don’t want a lovely physical book to hold in your hand.

2017 has been a banner year for publications for me, and it’s a high bar to beat for next year. I don’t expect to beat it, but I’m hopeful that some of my stories currently circulating will find nice homes.

I’ve also had some disappointing near misses, but such is the way of things. Onward!

Listen to “All of the Cuddles with None of the Pain” at Podcastle!

My story, “All of the Cuddles with None of the Pain,” is available for the listening or the reading at Podcastle.org as of this morning.  Personally, I recommend listening — the story has a full cast of ten readers and they all did a wonderful job. Hearing the different voices makes for a unique listening experience and (I think) enhances the emotional impact of the story.  Hope you enjoy!

Many thanks to Jen Albert, Khaalidah Muhammad-Ali, Graeme Dunlop, and everyone else at Podcastle for selecting my story and for doing such great justice to it in the reading!

Magical Menageries: Equus is Out!

Rhonda Parrish’s newest anthology, and the culmination of her Magical Menageries series, is out today! You can get Equus here in paperback or Kindle edition. My tiny story, “A Mother Unicorn’s Advice to Her Daughter” is among the 19 stories in this collection. If you like horses or speculative fiction or both, check it out!

A big thanks to Rhonda for selecting my story. She was a dream to work with.

I have some news that is fairly good and may even get really good that I’m dying to share, but I don’t want to jinx myself. So I’ll just leave you with that tantalizing, vague statement and ask you to wish me luck!

Spring 2017 Issue of The Colored Lens is Available!

And what a lovely cover it has! 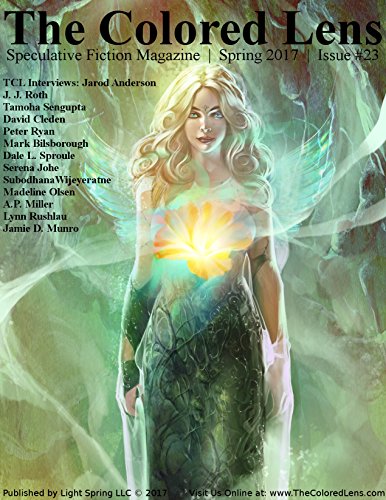 My story, “The Cartographer Gene,” is part of this issue. Enjoy!

I don’t usually announce acceptances until I’ve signed on the dotted line, but I’ve had some correspondence that makes me feel comfortable enough to say here that Phantom Drift:  A Journal of New Fabulism accepted my story, “Lucky Shanghai Dumpling,” for this year’s issue.

While all sales excite me, there are some things that are particularly wonderful about this one.

Phantom Drift focuses on interstitial writing, the space between “genre” and “literary realism.” That’s the space where work I most love to read falls and where I’ve aspired to write — but until now, I haven’t published anywhere with that focus. I’m delighted to have had a story find a home in a venue that gives me street cred as an interstitial writer.

I’ve been sending them stories every year since I started focusing on speculative fiction, which means I submitted one story every year for the past four years. Mostly because I am a huge Leslie What fan. I smiled for days after she followed me back on Twitter. No joke. And while she’s now listed as contributing editor rather than co-fiction editor on the masthead, just having the tiniest writing connection with her has been a dream.  One I feared forever out of reach.

And every year for the first three years, I got a personal rejection. All of them very kind and complimentary, but at the end of the day, still rejections.

Two out three of those stories found homes elsewhere. One is still circulating, a story I personally believe to be my best work. It has received a lot of love from pro venues but no proposals as yet. But I’m confident it will sell somewhere someday.

Anyway, it became a personal goal of mine to crack Phantom Drift.

By last May, I’d pretty much decided what I was going to submit this year. The more I revisited the guidelines and read some of the stories in the journal, the more I was convinced that if “Lucky Shanghai Dumpling” didn’t sell to them it was unlikely any story I ever wrote would. “We like stories that create a milieu where anything can happen. Stories can take the form of myth or fable. They can invent or suggest an unreal ambiance or describe a realistic landscape gripped by a surreal or unexplained event…” Yeah, that’s this story.

“Lucky Shanghai Dumpling” is weird and experimental with no protagonist. The closest thing it has to a protagonist is a magical (or is it?) food truck.

And now, it’s going to meet the world in one of my dream markets.

One of the first magazines to publish my speculative fiction, The Colored Lens, has bought another of my stories! “The Cartographer Gene,” one of my most plot-intensive stories, is slated to appear in the Spring 2017 issue. The Colored Lens publishes a lot of talented authors with whom my publishing, reading, and/or social media paths have crossed, including Julie C. Day, Jamie Lackey, and Rebecca Schwarz and I’m grateful to Dawn, Daniel, Henry, and Charlie for selecting my story.

I wrote and workshopped this story for a class through UCLA extension.  Alyx Dellamonica taught the class. It was a fun group.

Unlike so many of my stories, this one did not start from an exercise. I did use some of the exercises assigned during class as an opportunity to flesh out some of the scenes — including the climactic one. But the story started from an idea about a hereditary ability. It grew into an exploration of family dynamics where some members have a “gift” that others don’t, and how empty such a gift can be if it can’t be used to help others.

I recently rewrote certain parts of the story to change the antagonist from a Russian immigrant to a home grown bad guy. Though it was never my intent to suggest that all immigrants are bad guys, given the current political climate I wanted to avoid any possible reading that could support that interpretation.

Indeed, I have noticed that some of my stories have taken on more or different meanings given what’s currently going on in the world at present. Sometimes these meanings strike me as net positives, as with Piper: A Song for Flute and Chorus and Rumpelstiltskins. These stories had thematic elements that current events heightened and made more relevant than they perhaps were when I wrote them.

“Cartographer,” though, as originally instantiated, seemed to me to go the other direction and potentially to play into a narrative I didn’t want my work to support. The enemy isn’t immigration; it’s racism, sexism, antisemitism, homophobia, xenophobia. And people with guns who shouldn’t have them.

In any case, the antagonist is still just his own person and not meant to suggest that all red-staters are violent villains. Through the magic of white male privilege, I’m pretty confident that the risk of a rush to judgment on all white males is small.